What was once called the rich man’s disease is no longer restricted to only the rich. Diabetes is increasingly affecting people of low economic status, especially in the urban areas of affluent states.

Latest study by the Indian Council of Medical Research – INdia DIABetes – published in The Lancet Diabetes & Endocrinology suggests that the richer states — those with higher per capita GDP — saw a higher rate of diabetes among people of high as well as low economic status.

The study covered all 28 states, the National Capital of Delhi, and two of the union territories including Chandigarh and Puducherry with a total sample size of 124,000 people. Economically advanced states like Chandigarh, Tamil Nadu, Maharashtra and Jharkhand showed a high prevalence of the disease. 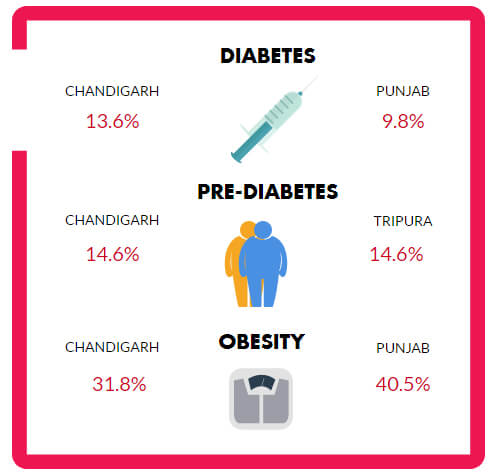 It was revealed that diabetes is two times as common in urban areas as in rural areas, in as many as seven of all the regions including states of Punjab, Tamil Nadu, Andhra Pradesh, Maharashtra, Tripura and Manipur and the UT of Chandigarh.

In most places diabetes was more prevalent in Low SES group than High SES group. For instance, in Chandigarh the rate of prevalence was 26.9% in Low SES whereas 12.9% in High SES.

The most disturbing fact was that a majority of these cases went undiagnosed and untreated. When left untreated, diabetes can cause many complications, eventually leading to fatal health problems.

Diabetes is a serious health problem and should be dealt with accordingly. As diabetes becomes more common among all income groups in India, we can assume we are falling into the pattern of the west. At Azkka, we sincerely believe in healing by virtue and hence urge patients to get checked regularly, modify their lifestyle and watch their diet.